Home  >  Category  >  Sacred run
On August 2, 1990, Ryosuke Cohen, Mayumi Handa, and I participated in the “Sacred Run” led by American Indian activist Dennis Banks. In his fight for Indian rights Banks played a leading role in the 1973 battle of Wounded Knee on the Rosebud Indian Reservation in South Dakota. The battle was televised worldwide and won the support of many people, including the American film star and celebrity Marlon Brando. Shozo Shimamoto: “Sacred Run” for Peace, Japan. 1990. (Left to Right) Dennis Banks, Shozo Shimamoto and Tom Lablanc gather at Art Space in Nishinomiya, Japan. Unusual mail art objects hang on the wall in the background. As a leading figure in the American Indian Movement, Banks in recent years has organized support for the environment and Indian rights with teams of runners from across the United States and Japan. The August, 1990 “Sacred Run” was planned as a relay from London, England, to Moscow via the Baltic States. Sweden, Norway, and Finland. The total distance of the relay was about 8.000 kilometers. “Sacred Run” was conceived as a way for people from various countries to meet one another and to exchange views. Each person could wish for their own survival as well as for that of the diseased Earth. While running with other participants, I invited local mail artists to join usm and together we tried to devise new ways of networking. On August 5. an event was staged at Milton Keynes in the suburbs of London. The next day, on the anniversary of the atomic bombing of Hiroshima, we started “Sacred Run”. One of the London-based mail artists. Barry Edgar Pilcher, wrote music for the run and played it on his saxophone together with his group. Conspiracy. Just before the performance started, Dennis Banks began explaining the idea behind the run as he had done in Paris, Berlin, and in many other places. I thought this was a really nice way of attracting other people’s attention. Native Americans appeared before us with plenty of leathers on their heads and backs. A number of families picnicking nearby flocked to the event to see them drumming and shouting. Later, hundreds of local people took part in the dancing. (Left to Right) Mayumi Handu, Kinami, Ryosuke Cohen, and Shozo Shimamoto during “Sacred Run”, August 10, 1990, Paris, France. Photograph by NATO. The French mail artist, NATO, organized our networking activities in Paris. He told me that he became a mail artist after being impressed by my art. It would seldom happen in any other world other than mail art that a contemporary French artist would be influenced by Japanese art. NATO wanted to make a plastic figure of me in celebration of “Sacred Run”. He applied a coat of silicone resin to my head as he began a performance of nude women moving around me. One woman sat on my head during her performance. Mail artworks were posted on the nude women during the performance; a rather unique form of art display. We drove a remodeled truck from London to Warsaw that was covered with paintings and messages sent by mail artists from all over the world. I shaved my head and had many slides projected on it. I also had mail artists draw pictures and write messages on my head. In Belgium and the Soviet Union, local artists were so meticulous in their pictures and messages on my head that I realized what delicate national traits they have. More than 1,000 envelopes of mail art were hung as an exhibition by Belgian mail artist Charles Francois. Joki, a mail artist from Minden, Germany, piled up over 1.000 pieces of mail art, and I buried myself in this pile, scattering mail art over my shaved head. Banks’ “Sacred Run” was a magnificent event that included mail art as an important, collaborative element. In the future, he plans to continue the relay across Africa, North and South America. “Sacred Run” is networking that enables participants and spectators to think about dealing with social problems, wars and the environment. Here, networking mail art releases art from the frame ol'tradition into the outer space surrounding the frame. https://artpool.hu/MailArt/chrono/1995/Shozo.html   https://artpool.hu/MailArt/chrono/1995/Shozo.html 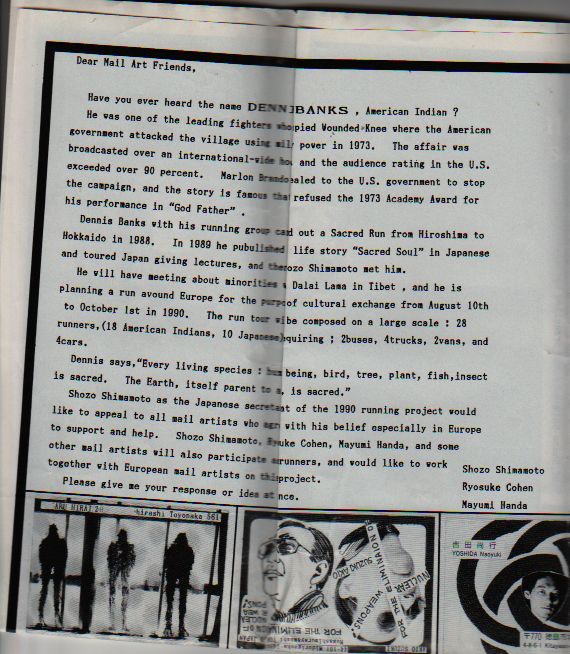