Serge Segay (real name Sergey Vsevolodovich Sigov Russian: Сергей Всеволодович Сигов, 19 March 1947 – 21 September 2014), also known as Sergej Sigej, was a Russian artist, poet, writer as well as specialist in Russian Futurism.Many of his artworks are in private and public collections throughout the world.

He was an important figure in Transfurism movement[2][3] as an artist, poet, writer, as well as a prominent figure in Mail art history. He was also key member of “Uktuss School” and “Anarfut” art movements.

He was a key figure in movement of Anarcho-futurists in Vologda, Russia, in 1962-1965. At that time he starts writing his first Zaum and abstract verses.

Since 1965, he was a member of “Uktuss School” art movement in Yekaterinburg, Russia. During this time, in 1969, he creates his first “verbal pictures” or “visual poems“. In 1970, his first sound poetry. He was an author in samizdat journal “Nomer”.

In 1974, he moves to Yeysk with his wife. They start publishing samizdat journal Transponans in 1979, in 5 copies. They entertain numerous guests from both Russian capitals, creating art and poetry in collaboration. Their Yeysk abode becomes the cultural centre for Russian art and literature underground. They also make multiple performances in Saint-Petersburg during these years. Serge Segay becomes close friend of Nikolai Khardzhiev He also corresponds with Igor Bakhterev.

His paintings during this period feature some obvious symbols: Russian letter ‘yat’, square heads, centauri and crosses. Early paintings are mostly black and white with occasional colour. Then follows a period of very colourful paintings and painted cloths, influenced by his fascination with Nomadic culture of berbers. At a later stage, he freely mixes both styles with other techniques. Of course, ideas of Transfurism, of mixing visual, verbal and sound, therefore transcending medium ties, are often featured in his body of work during this period and later on.

He also published many articles during this period on Russian Futurism, as well as a book of Vasilisk Gnedov‘s work.

Serge Segay joins Mail art movement in 1985. Later on, he organized first international Mail art exhibition in the USSR in 1989, which also happened to be first international art exhibition in Yeysk, Russia. He corresponds with numerous artists around the world, including Robin Crozier, John M. Bennett, Guy Bleus, Shozo Shimamoto and others. He also participates in many Mail art projects. 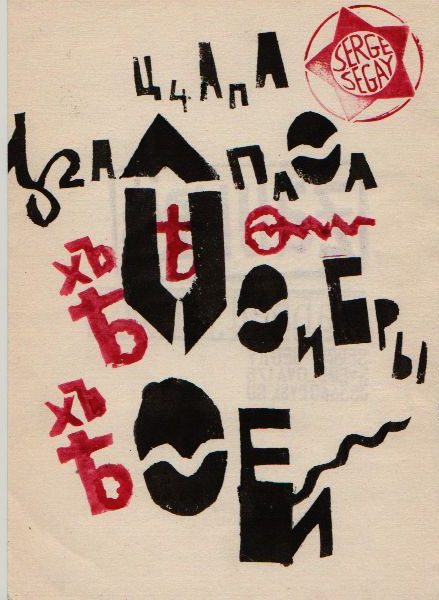